Every toggle in Unleash can have something called variants. Where feature toggles allow you to decide which users get access to a feature, toggle variants allow you to further split those users into segments. Say, for instance, that you're testing out a new feature, such as an alternate sign-up form. The feature toggle would expose the form only to a select group of users. The variants could decide whether the user sees a blue or a green submit button on that form.

Variants facilitate A/B testing and experimentation by letting you create controlled and measurable experiments. Check our blog post on using Unleash for A/B/n experiments for some more insights into how you can set it up.

Whenever you create a feature toggle, you can assign it any number of variants. This is commonly done in cases where you want to serve your users different versions of a feature to see which performs better.

A variant has four components that define it:

A variant's weight determines how likely it is that a user will receive that variant. It is a numeric value between 0 and 100 (inclusive) with one decimal's worth of precision.

When you have multiple variants, the sum of all their weights must add up to exactly 100. Depending on the weight type, Unleash may automatically determine the weight of the new variant and balance it out with the other variants.

There are two kinds of variant weight types: variable and fixed. Unleash requires you to always have at least one variable weight variant.

Overrides are intended to be used for one-off cases and during development and may not be suitable for other use cases.

The weighting system automatically assigns users to a specific group for you. If you want to make sure that a specific user or group of users receives a certain variant, though, you can use the override functionality to achieve that.

When adding an override, you choose a field from the Unleash Context and specify that if a context contains one of a given list of values, then the current variant should always activate.

You can use both standard and custom context fields when creating overrides.

Each variant can have multiple overrides, so you can use any number of context fields you want to create overrides. When using multiple overrides, each user only has to match one of them. In other words, if you use the following overrides, the users with IDs aa599 and aa65 and any users who use the client with ID 123abc will receive the specified variant:

Note that if multiple variants use overrides that affect the same user, then Unleash can not guarantee which override will take effect. We recommend that you do not use multiple overrides that can conflict in this way, as it will probably not do what you expect.

Each variant can have an associated payload. Use this to add more context or data to a payload that you can access on the client, such as a customized message or other information.

Variant stickiness is calculated on the received user and context, as described in the stickiness chapter. This ensures that the same user will consistently see the same variant barring overrides and weight changes. If no context data is provided, the traffic will be spread randomly for each request.

How do I configure variants​

In the Unleash UI, you can configure variants by navigating to the feature view, and then choosing the 'Variants' tab. 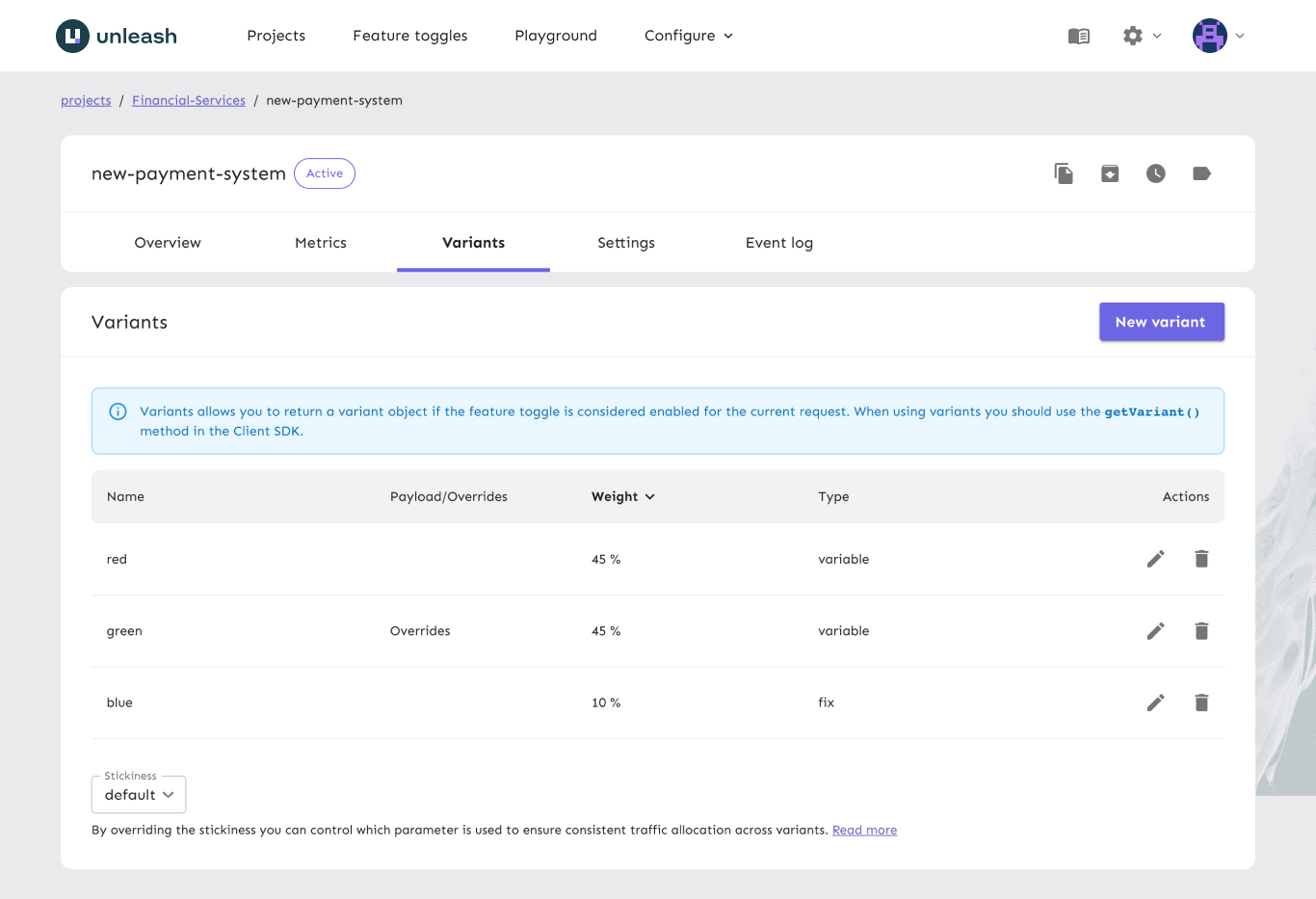 When a toggle has no variants or when a toggle is disabled for a user, Unleash will return it with variant data that looks like this:

This is a fallback variant that Unleash uses to represent the lack of a variant.

Note: The actual representation of the built-in fallback variant in the client SDK will vary slightly, to honor best practices in various languages.

To make use of toggle variants, you need to use a compatible client. Client SDK with variant support:

If you would like to give feedback on this feature, experience issues or have questions, please feel free to open an issue on GitHub.