Skip to main content
🚀 Unleash brings powerful Constraints feature to OSS users. Read more →
Environments are available in Unleash v4.3.x and later. They can also be enabled from Unleash v4.2.x with a feature toggle.

Environments is a new way to organize activation strategy configurations for feature toggles into separate environments. In Unleash, a feature lives across all your environments — after all, the goal is to get the new feature released as soon as possible — but it makes sense to configure the activation differently per environment. You might want the feature enabled for everyone in development, but only for yourself in production, for instance.

Previously, Unleash Enterprise could use strategy constraints to control the rollout across environments. With the new environments feature, this is no longer necessary. Now all activation strategies belong to an explicit environment instead.

Further, connected applications will use environment-scoped API keys to make sure they only download feature toggle configurations for the environment they are running in.

Finally, metrics have also been upgraded to record the environment. This, in turn, means that Unleash can display usage metrics per environment.

Despite this being a shift in how Unleash works, everything will continue to work exactly how it did for existing users. For backwards compatibility, we have created an environment named "default" that will contain all of the existing toggles and API keys. Read more about that in the migration section.

Environments exist on a global level, so they are available to all projects within Unleash. However, every project might not need to use every environment. That's why you can also choose which of the global environments should be available within a project.

How to start using environments​

In order to start using environments you need to be on Unleash v4.2 or higher.

If you are on v4.2, you also need to have the environment feature enabled (if you are using Unleash Hosted, please reach out on contact@getunleash.io if you want to start using environments.

If you are on v4.3 or later, environments are already enabled for you.

Navigate to the project and choose the “environments” tab. 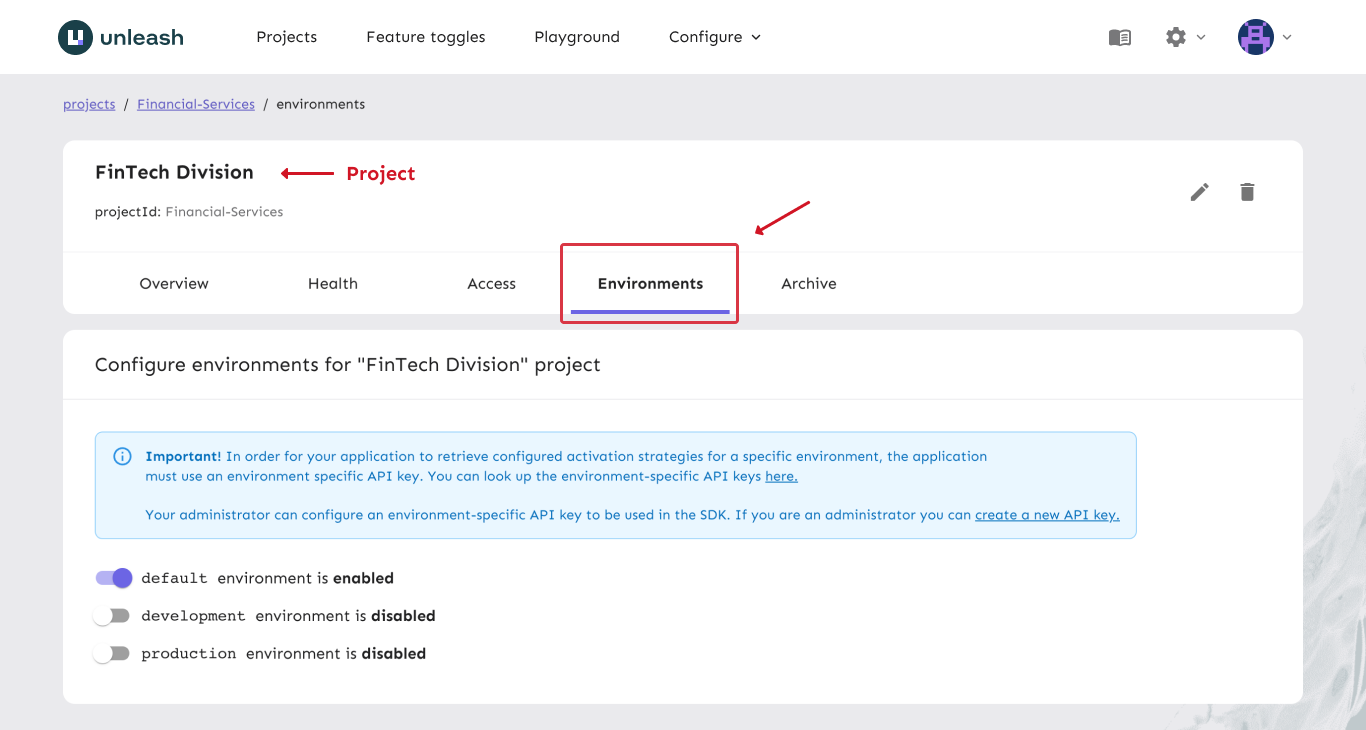 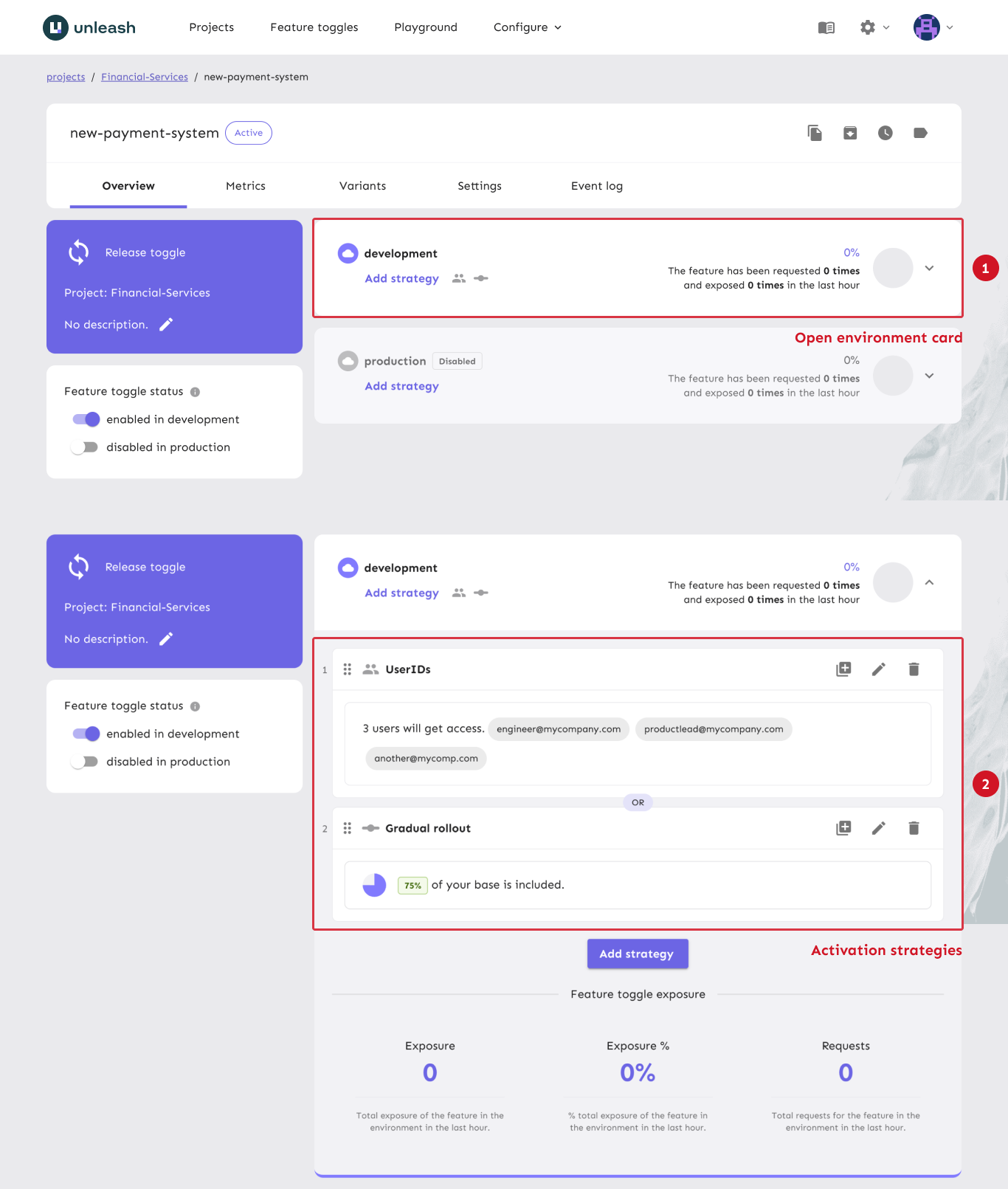 In order for the SDK to download the feature toggle configuration for the correct environment you will need to create an API token for a defined environment. 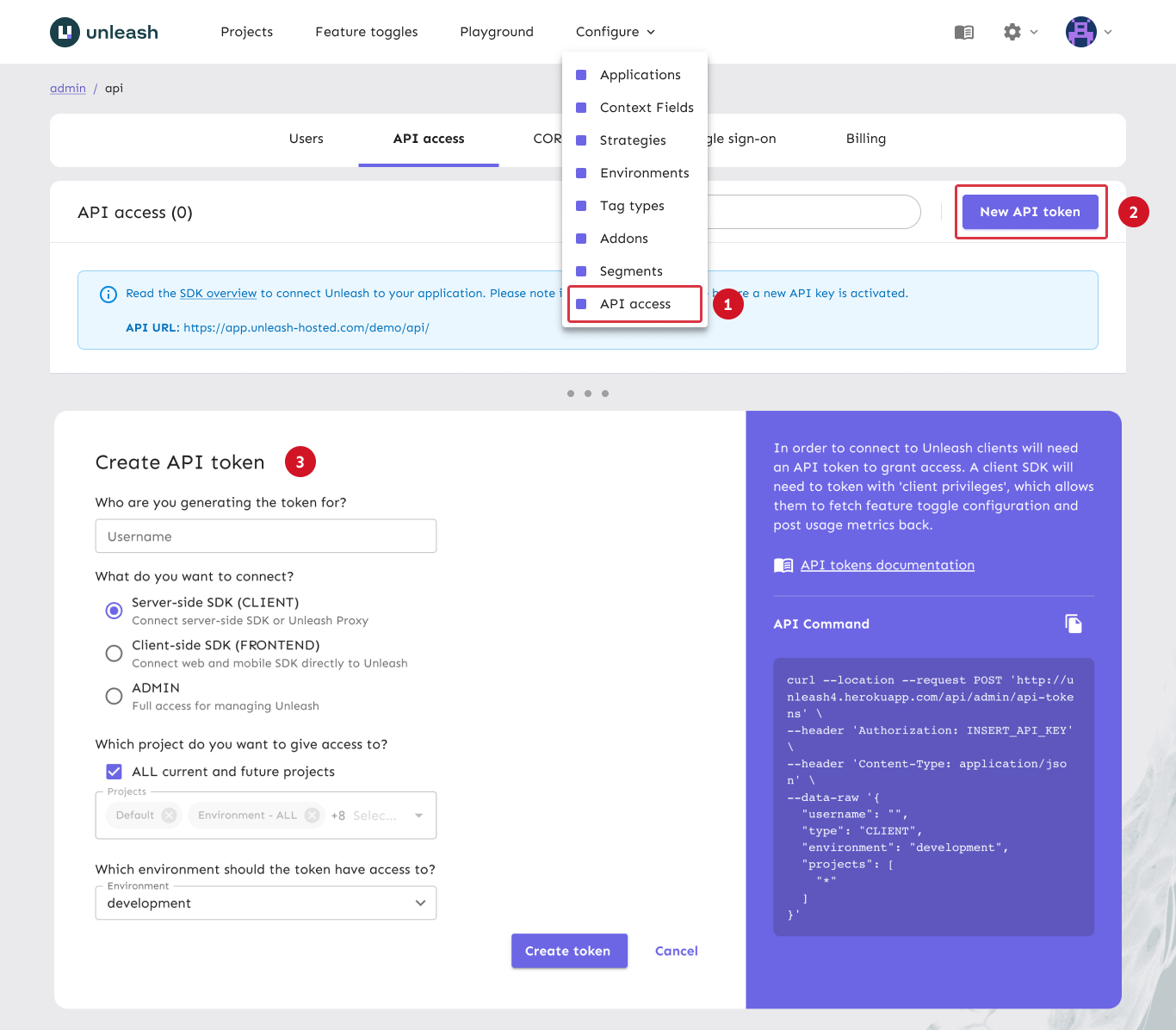 Environment cloning is an upcoming feature, and is scheduled to become available in one of the next few releases.

Once created, the new environment works just as any other environment.

To ease migration we have created a special environment called “default”. All existing activation strategies have been added to this environment. All existing Client API keys have also been scoped to work against the default environment to ensure zero disruption as part of the upgrade.

We have made some slight changes to events related to feature toggles: there's one deprecation and several new event types. Most of the new events contain project and environment data.

To avoid missing important updates, you will also need to update your addon configuration to subscribe to the new events.

In order to support configuration per environment we had to rebuild our feature toggle admin API to account for environments as well. This means that we're making the following changes to the API: